Dr. Wimmer maintains an Archive of questions from the forum. Go to http://www.rogerwimmer.com and click on "The Research Doctor Archive" link.
Post Reply
3 posts • Page 1 of 1

Doc: To start the New Year, I thought I would ask a different kind of question. I’m not sure if you can answer this, but I thought I would ask anyway. I have an Android smartphone and I’m always looking for new ways to use it. I frequently search the Internet for “Tips & Tricks” and find many useful things, but I was wondering if you have anything new. Do you? (By the way, if you answer this question, I also have one about QR codes. Any interest?) - CK

CK: Smartphones are amazing devices. In fact, in the 10th Edition of the Mass Media Research text Joe Dominick and I are currently writing (published later this year), I added smartphones to our list of mass media. Why are smartphones the newest mass medium? I know you didn’t ask this, but allow me to explain anyway because it’s related to your question (I guess).

We define “mass media” as any form of communication that simultaneously reaches a large number of people, including but not limited to radio, TV, newspapers, magazines, billboards, films, recordings, books, the Internet, and cell phones. We added cell phones to the mass media list because they are now almost universally used by all age and gender groups in several countries. One person, one company, or one entity can now communicate simultaneously with hundreds of thousands or even millions of people via cell phones, particularly with text messages. In addition, cell phones, specifically smartphones, now unite all other mass media into a single handheld source. Because of this, we include the smartphone (along with SmartTVs) in a new class of mass media we call “Smart Mass Media." Why? Because they can both function as individual mass media and simultaneous allow users to have access to all other mass media. (SmartTVs will soon have telephone capability.)

Do I know any new tips or tricks for Android smartphones? I have an Android phone that I bought about a month ago, the Samsung Galaxy S2 Skyrocket .

Like you, I have been searching for different ways to use the phone and came up with a question about shortly after I bought the phone. The Skyrocket has 16GB internal memory and I also have a 16GB micro SDHC card in it. Now, I assume that many people would say that 32GBs of storage is enough for a cell phone, but since I can access files on the SDHC card through the Files icon on the phone, I wondered if I could insert an external drive (flash drive) into the micro USB port at the bottom of the phone that is used to charge the phone and connect to my desktop to transfer files. Why not?

That was my question...Can I plug a flash drive into the micro USB port on my phone and access files on that drive? I went to several stores and asked if it were possible, including the AT&T store where I bought the phone. Not one person said “yes,” because they said there wasn’t an adapter available that would go from a regular USB to a micro USB. (The adapter needed to be a female USB to a male micro USB.) The tech geeks also said that even if I did find such an adapter, my phone probably wouldn’t recognize the flash drive. Hmm . . . challenge accepted.

I looked all over in stores and on the Internet for the adapter and had no luck anywhere. After a few days, I went back to eBay and guess what? Three different sellers had the item! What? I went from “the adapter doesn’t exist” to three sellers with the adapter in just a matter of a few days? Amazing. I bought a few of the adapters. One-half of the challenge completed.

The adapters arrived in a few days and I immediately plugged one into my Skyrocket and then inserted a 32GB flash drive into the adapter. Guess what again? It worked! Through the “Files” icon on my phone, I can access the flash drive. But I wanted to make sure that it would recognize all types of files, so I loaded Word files, Excel files, PDF files, MP3 files, movies, videos, and every other type of file I could think of on the flash. The phone recognized everything. I literally can put all the information on my desktop and two netbooks on flash drives and access the information on my smartphone. Second half of challenge completed.

More stuff . . . The flash drives I had when I first received the adapters from eBay were typical sizes...about two inches long. The USB adapter is also about two inches long and I thought a four inch flash drive/adapter was a bit too long. I looked around and found the Sandisk Fit . If you click on that link, you’ll see a photo that compares the drive to a U.S. dime. 16GB on the size of a dime. Give me a break. I bought a 16GB Sandisk Fit for about $25 at a local tech store.

The adapter is on the left; Sandisk Fit on the right . . .

Attached to my Skyrocket . . . 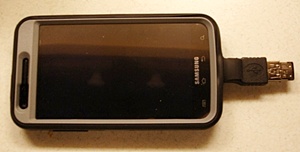 So, that’s my “tip and trick” for you. If you want more storage space for your phone, you may be able to do what I did and attach a flash drive for external storage.

I obviously connect the flash drive when only I need information from it. I don’t leave it plugged in all the time. It’s very handy for me if I’m away from my computers because virtually all the information I need is stored on two Sandisk Fit drives I keep in my pocket. When I’m away from my computers I have access to thousands of data files, thousands of songs, thousands of photos, a few movies, and all the research files I may need for a study I am conducting. It’s great.

Finally, I mentioned that I was originally told that my idea wouldn’t work. The salespeople at the AT&T store said that Samsung sales materials didn’t have any information about inserting a flash drive into the phone. After I demonstrated that my idea worked (they loved it), they said they were going to contact Samsung and let them know about this new trick for the Skyrocket. Cool. My commission? Zero.

Have a good time with your smartphone and you can now send me your question about QR codes.


(Want to comment on this question? Click on the POSTREPLY button under the question.)
Roger Wimmer is owner of Wimmer Research and senior author of Mass Media Research: An Introduction, 10th Edition.
Top

To Readers: I sent this question and my answer to my twin brother and a few hours later he called and said that he found information about the external drive on a website. When I looked initially, this source never emerged. I’ll always accept help from anyone.

This article gives a brief, but excellent, explanation of “USB-on-the-Go” . . . click here. Another good explanation is here.

For more information about “USB-on-the-Go,” click on this search.

Then, after further searching on the Internet, I found a few videos on YouTube that show the USB process – here is one, and I found products on eBay that allow for the external USB hookup, such as these.

This is a classic example, demonstrated by me, of not asking the right questions and not conducting the correct searches on the Internet. It’s too bad that none of the sales people at the cell phone stores knew about this and it’s too bad I didn’t know about this information before I spent all the time conducting my experiments. But that’s the way it goes. I discovered something that was already there. - Roger
Roger Wimmer is owner of Wimmer Research and senior author of Mass Media Research: An Introduction, 10th Edition.
Top

This is very nice information and very useful for me. Thanks for sharing. - Anonymous


(Want to comment on this question? Click on the POSTREPLY button under the question.)
Roger Wimmer is owner of Wimmer Research and senior author of Mass Media Research: An Introduction, 10th Edition.
Top
Post Reply
3 posts • Page 1 of 1