Dr. Wimmer maintains an Archive of questions from the forum. Go to http://www.rogerwimmer.com and click on "The Research Doctor Archive" link.
Post Reply
1 post • Page 1 of 1

Dr. Wimmer: I have become intrigued by an a cappella group called Pentatonix. I have seen several of the group’s videos, but haven’t seen them in person. I know you go to many concerts and wondered if you have seen them. If so, what did you think? - Cheryl

Cheryl: As you know, I have taken a while to answer your question. The reason is that the day after I received your question, about a month ago, our good friend Ken Phillips, who is the publicist for Pentatonix, invited my wife (Darnell) and me to see the group’s concert in Denver on February 15. We went, and here is the answer to your question.

For anyone who doesn’t know about Pentatonix, it’s an a cappella (no instruments) group of singers who have become immensely popular since winning the third season of NBC’s “The Sing-Off” in 2011. The group consists of five young (from my perspective) people: Scott Hoying (22), Kirstie Maldonado (21) and Mitch Grassi (21), Avi Kaplan (24) and beatboxer Kevin “K.O.” Olusola (25).

Before the concert, I watched several Pentatonix videos and was impressed, but I wasn’t sure if their performances would carry through to a live event. I got that answer after about 60 seconds of their first song. But, before I get to the concert, I want to mention something else.

Because of Ken’s relationship to the quintet, we were able to meet with them in their dressing rooms for about an hour before the concert. What a treat. They are all smart, funny, humble, and, quite simply, very nice people. It was fun to talk to all of them and watch them get ready for the concert (“controlled chaos” is a good way to describe it). Here they are just before the concert started (Kirstie, Scott, Mitch, Avi, Kevin): 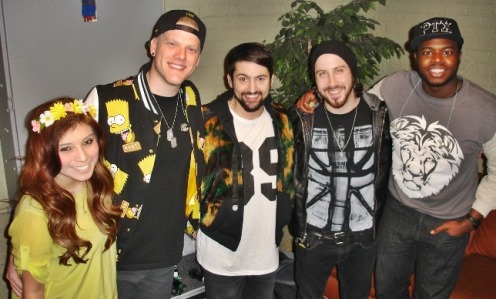 The concert. The show was at the Paramount Theater in Denver, an old, but very nice venue with a typical stage and auditorium seating. Before the show started, a white scrim was hanging to block the view of the stage. The quintet walked on stage behind the scrim, was hit with five spotlights, the scrim was dropped and they started singing. The instant before the scrim was dropped was the last silent moment for the next 90 minutes.

As you mentioned, I have been to many concerts and this is one of the best performances I have ever seen. I’m dead serious and I say this for two reasons:

Reason 1: All five members of Pentatonix are excellent singers who sing very complex songs. Each person is capable of singing the lead, and they all give 100% during the entire show. They literally never stop moving while they’re on stage. It was a complete 90-minute performance by all and it was clear they have a good time performing. It was fun hearing them sing and watching them perform.

Reason 2: From the opening song, Pentatonix immediately “had” the audience. By that I mean, they immediately got the audience involved in the show and they made it even better with several funny bits, interactions with the audience, and interactions amongst themselves. They sing to the audience, not at them. It’s great and very unique, and it was very clear that everyone in the audience, including the “Pentaholics” (hardcore fans), enjoyed the entire show.

Observation 1: I saw something at the concert I have never seen before. As soon as the singing started, most of the sold out audience of 1700+ people jumped to their feet and remained standing for the entire concert. I’m serious. I kept looking around expecting people to sit, but they never did. That should give you a clue to how well Pentatonix was received.

Observation 2: The audience included a wide range of ages, from kids under 10 to people who were in their 70s and maybe older. This is true, I think, because of the songs Pentatonix sings, their talent, their energy, their obvious ability to communicate with the audience, and the fun they have on stage.

Here is Pentatonix during the concert: 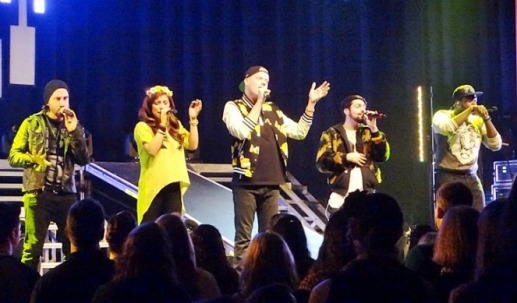 In summary, I know the group’s current tour is sold out (including European shows), but if you get a chance, don’t pass up the opportunity to see Pentatonix in person. You will be truly impressed. For more information, here is the Pentatonix website.

You can also watch a few videos if you click here. Be sure to watch “Evolution of Music.”

Do the Pentatonix videos accurately portray the group’s talent? No. Pentatonix is much better in person. If you think the videos are good, you will be amazed at what you hear and see if you get a chance to see the quintet in person.

Addendum: Pentatonix just released a new video and it really demonstrates the talent of each member of the group – click here.

(Want to comment on this question? Click on the POSTREPLY button under the question.)
Roger Wimmer is owner of Wimmer Research and senior author of Mass Media Research: An Introduction, 10th Edition.
Top
Post Reply
1 post • Page 1 of 1