Dr. Wimmer maintains an Archive of questions from the forum. Go to http://www.rogerwimmer.com and click on "The Research Doctor Archive" link.
Post Reply
4 posts • Page 1 of 1

Doc: Have you seen the video about the "time traveler" in "The Circus," Charlie Chaplin's 1928 movie? It looks like the woman in the background is talking on a cell phone, but it's 1928. Any thoughts? - RA

RA: Yes, I have seen it and I was wondering if someone would send a question about it. If you haven't seen the video, it's on YouTube, and here is one version.

My thoughts? I think the video is interesting, but the idea of a "time traveler" is silly to me. If the film (supposedly showing the Hollywood premiere of the movie) hasn't been altered in any way, there has to be a logical explanation for the item the woman (if it is a woman) is holding in her hand. The most logical thing, in 1928, would be some type of hearing aid device. I checked on the Internet and found many examples of antique hearing aids. Here is one that could, at a distance, look like a person was holding a cell phone: 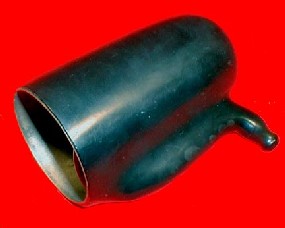 
(Want to comment on this question? Click on the POSTREPLY button under the question.)
Roger Wimmer is owner of Wimmer Research and senior author of Mass Media Research: An Introduction, 10th Edition.
Top

Anon: As I have mentioned several times on this column, I edit the questions sent to me for grammatical errors or clarity. However, in your case, I decided to post your comments just as you sent them to me. So, on to your comment(s) . . .

Yes, I'm sure at this point in time that time travel isn't possible. While some theoretical physicists say that they may, at some point in the future, figure out how to solve the equations necessary to prove the portion of Einstein's Theory of Relativity related to time travel, no one has been able to do that yet. Since the equations necessary for time travel haven't been developed in 2010, it follows that the equations were not available in 1928. If they were, we'd all be traveling around in the past and/or future. Therefore, if accepting all the current scientific information from theoretical physicists about time travel makes me a "pompous ass" in your opinion, then I guess I am one.

Next, I'm sure that the item in the person's hand in the Charlie Chaplin film sequence is not a cell phone if the film, as I mentioned in my original answer, is original and not altered in any way. Cell phones did not exist in 1928, and time travel, as far as theoretical physicists are concerned, did not exist in 1928. Those two pieces of information, by default, allow me to say that I'm sure the item in the person's hand is not a cell phone. If that conclusion makes me a "pompous ass" in your opinion, then I guess I am one.

However, I follow the tenets of scientific research. One of the tenets is that scientific research is self-correcting. If you can prove to me that the person in the film appears via some type of time travel (Wormhole? Rotating universe? Some other explanation?) and/or that the item in the person's hand (if the film is legitimate) is a cell phone, then I will be happy to change my opinion. Show me your proof. I'm ready to post a retraction. I'll wait by my computer.

You said (sic), "Im SURE youre a pompous ass who pushes his beliefs on others, because if YOU think it, its gotta be true." If me stating facts, such as there is no evidence that time travel is possible at this time, and cell phones didn't exist in 1928, makes me a pompous ass, then I guess I am one. I will alert Joel Denver, my wife, and the media.

Finally, I don't see that I "pushed" my opinions on anyone. I said that I was sure about the two items. I did not say that I'm sure and therefore everyone else has to feel the same way. Never said that. If you believe the person in the film is a time traveler talking on a cell phone, then go ahead. It's a free country.

Thanks for writing.
Roger Wimmer is owner of Wimmer Research and senior author of Mass Media Research: An Introduction, 10th Edition.
Top

Doc: Bravo to you for the way you answered the person (I'll use that word instead of another descriptor) who called you a "pompous ass." I couldn't disagree more. I have been reading your column for many years and have reads hundreds, or maybe thousands, of your answers, and I have never once interpreted an answer as "pushing" anything.

On the contrary, your answers have always been fair and objective, and in almost every case, you give the person who sent the question a variety of alternatives.

You have done a great job over the years. Don't let that person get you down. Keep up the good work. - Anonymous

Anon: Thanks for the comments and I will try to keep up the good work.

I won't let the person's response get me down. He/she has the right to comment on anything. I'm just waiting for him/her to prove that time travel is possible and that the item in the film is a cell phone. Besides, I now have a new nickname. I may even start signing my answers as "PA."
Roger Wimmer is owner of Wimmer Research and senior author of Mass Media Research: An Introduction, 10th Edition.
Top

Hey, Doc: It looks like there is another "pompous ass" that agrees with your evaluation of the item the person is holding in the Charlie Chaplin movie. This was posted on the MSNBC website tonight: click here. Looks a little similar to me. - Anonymous